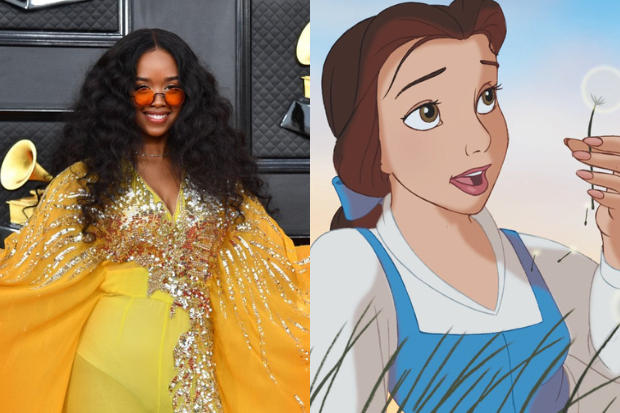 Filipino-American singer H.E.R. has been cast to play the Disney Princess Belle in a TV and streaming special in celebration of the animated film’s 30th anniversary.

The five-time Grammy Award winner will be playing the role in the American broadcast channel ABC’s special that features a hybrid of live-action musical performances and animated scenes, as per Deadline last Wednesday, July 20.

The special includes songs from the original “Beauty and the Beast” animated movie, which will be performed in front of a live audience at Disney Studios. It also shows never-before seen musical performances, sets and costumes that pay homage to the classic story, as per Variety, also last Wednesday.

The “Beauty and the Beast” special will air on ABC on Dec. 15 and will be available on the streaming platform Disney+ the following day. It is directed by Hamish Hamilton and executive-produced by Jon M. Chu.

“I can’t believe I get to be a part of the ‘Beauty and the Beast’ legacy,” H.E.R. was quoted as saying. “The world will see a Black and Filipino Belle! I have always wanted to be a Disney princess, and I get to work with two wonderful directors Hamish Hamilton and my favorite, Jon M. Chu. It is very surreal and I couldn’t be more grateful.”

H.E.R. won Song of the Year at the 2021 Grammy Awards for her track “I Can’t Breathe,” marking the first time she received a Grammy. She also won an Oscar for her song “Fight for You” during the Academy Awards last year.

“Beauty and the Beast” was released in 1991 and went on to achieve critical acclaim. It was the first animated film to earn a nomination for the Best Picture Oscar, and ultimately won two Oscars—one for best original score and another for best original song.

It has since had a live-action movie adaptation released in 2017, starring Emma Watson as Belle.  /ra

The hottest entertainment news straight to your inbox

Don’t miss out on the latest news and information.

Topics #Alternative #Beauty #Health Care #Medicine #Popular Diets
Don't Miss it H.E.R. To Play Belle In Disney’s ‘Beauty And The Beast’
Up Next ‘Beauty and the Beast’ to kick off Argyle season