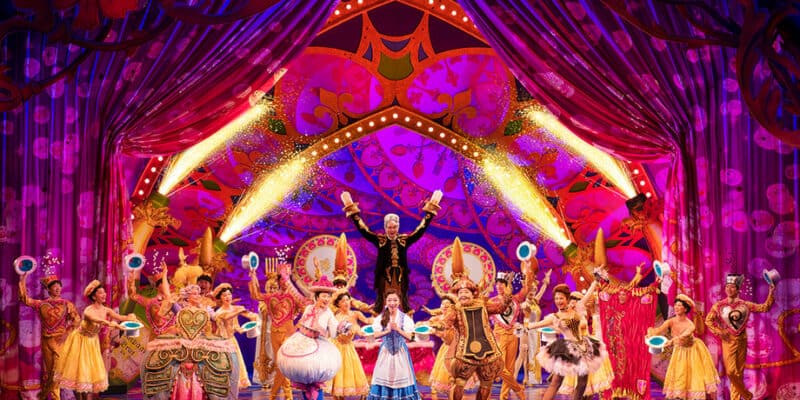 A reimagined version of the Alan Menken-composed, Howard Ashman and Tim Rice musical Beauty and the Beast based on the Disney animated film of the same name will open for the first time in a permanent production within a Disney Resort — and early tickets are anticipated to sell like hotcakes.

First opening on Broadway in 1994, the Beauty and the Beast musical took to the Great White Way after then-Disney CEO Michael Eisner was urged to realize the potential of the similarly titled 1991 hit animated film. It starred Susan Egan as Belle and Terrence Mann as the Beast, and was an instant hit, eventually clinching the Laurence Olivier Award for Best New Musical in 1998 after opening in London’s West End. The production ran for thirteen years on Broadway, is the tenth longest-running musical, and has spawned multiple US and UK tours and revivals.

Now, the Shiki Theatre Company, known in the musical theater world for their previous renditions of Disney Broadway classics such as The Little Mermaid, Lion King, Aladdin, and Frozen, are going to bring their own magic into the Disney Parks themselves — with a reimagined version of Beauty and the Beast coming to the Maihama Amphitheater, October 2022 located right next to the official Disney Ambassador Hotel in the Tokyo Disney Resort.

Known for their expertly localized Japanese productions, the Shiki Theatre Company have begun their Advance Ticket Lottery process this week — with only a couple of days for fans (namely, exclusively Shiki no Kai members) to try their hand at snapping up tickets.

Their ticketing announcement is translated as follows:

🌹 “#BeautyAndTheBeast” Advance Ticket Lottery 🌹
We are now accepting applications for the Disney musical “Beauty and the Beast” ticket lottery, which will stay open until 18:00 on the 27th (Wednesday) (“Shiki no Kai” members only / immediate enrollment available online).
As the first day of release is expected to see high demand, we advise that you take advantage of this opportunity.

Even though we don’t have any cast announcements or images yet, from their past productions it’s clear to see that the Shiki Theatre Company definitely know what they’re doing when it comes to putting on a good show — and Disney fans are willing to fight tooth and nail for seats.

Their production of The Little Mermaid in 2018 (and again in 2021) saw dazzling costumes and brilliant set design beautifully simulating the movement of water — Ariel “swam” all around the stage while singing for extended durations with the help of expertly managed wires — which was no mean feat, as seen in this video:

The slightly stylized nature of the theatrical design all works in tandem to create a truly unique rendition of a beloved Disney and Broadway classic.

We can expect something similar with Shiki Theatre Company’s Beauty and the Beast, for sure. We might even be able to predict what the production could look like, if the Shanghai Disney Resort’s production of Beauty and the Beast (also directed by Shiki Theatre Company) is anything to go by — though we can still expect it to be slightly different, given that it’s “reimagined”.

Shiki Theatre Company’s brand new reimagining of Beauty and the Beast is definitely one not to be missed — as Japan opens up for tourism and the Parks adjust upon seeing bigger crowds after a long period of being closed due to COVID-19, visiting Disney Park fans from overseas may want to add this to their Tokyo Disney Resort itinerary.

Do you have plans to visit the Tokyo Disney Resort? Would you see this production of Beauty and the Beast? Leave your thoughts in the comments below!