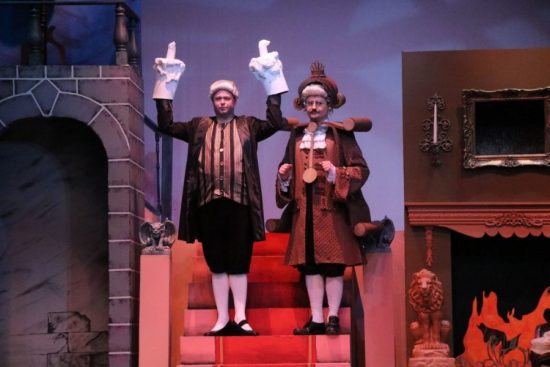 Musicals adapted from successful films, both animated and live-action, have been a staple in the theatre industry for many years due to their broad appeal and family-friendly marketability. While not always adored by the most judicious of critics, they are always crowd-pleasers. Disney has been particularly successful with this formula.

…tthe ideal musical for the entire family and will bring a welcome sense of childhood nostalgia to any adult and joy to any child.

The Port Tobacco Players’ (PTP) current production of “Disney’s Beauty and the Beast,” meets all expectations. Based on the 1991 Academy Award-winning, animated film of the same name, the musical tells the story of a young woman named Belle (authentically played by Becky Norris Kuhn) with hopes of a bright future and living in a small French town full of close-minded people. Through a series of events, her father is imprisoned by a cursed, mythical beast in a castle. She offers to take his place in order to free him. Although her relationship with the Beast does not start off well, she slowly begins to see his humanity as the story develops. The classic fairy tale is best known for exploring the the principle of not judging a book by its cover—going beyond appearance in order to see someone for who they truly are.

Set design by Chris Magee creates a beautifully fluid, semi-realistic set that accurately depicts each of the different settings of the show. Everything, from the town square to the front of Belle’s house to the Beast’s castle and beyond, is represented with clarity. The judicious use of levels, particularly in the Beast’s castle, is interesting to watch as it transforms the story. My favorite part of the castle set was the lit, enchanted rose in the upper left corner of the stage. It served as this overarching presence throughout the show and added a sense of gravity to the story. Mike O’Shields’ beautifully painted sets further complemented Magee’s design. Their work together created a magical effect throughout the production.

Costume direction by Charnice Frazier brings a pleasantly surprising avant-garde flair to what could have been cartoonish due to the show being a Disney property. It feels far more grounded and is a wonder to behold. Her reimagining of the Beast’s mane as a permed, voluminous set of hair and use of facial prosthetics that did not hinder the actor’s ability to express himself were welcome creative choices. Lumiere’s understated clock features allowed the character’s humanity to shine through and made it easier to empathize with him.

Billy Dorsey infuses the Beast with a welcome, boyish vibe that brings a sweet humanity to him. His developing feelings for Belle and growing remorse for his actions are beautiful to watch. Bradley Evans as Cogsworth gives an inspired performance that had some serious, young Johnny Depp vibes. His character choices were captivating to watch even when he wasn’t speaking and left me smiling. Benjamin Simpson’s Lumiere has the perfect level of energy and “French” without being outlandish or cartoonish. He had me laughing out loud in many scenes.

Direction by Tessa N. Silvestro brings quintessential Disney magic to this production. Her use of special effects (as done by Keith Linville) at the beginning and end of the story was a wonderful addition and helped the show feel reminiscent of its animated inspiration. Her strategic blocking choices made for visually interesting scenes. In particular, I enjoyed her choice to have the Beast lying on the floor as Belle read to him in the library. It added a palpable intimacy to their connection.

“Disney’s Beauty and the Beast” is the ideal musical for the entire family and will bring a welcome sense of childhood nostalgia to any adult and joy to any child. It’s not an art house production, and thank goodness for that. It’s Disney magic and, as we all know, the Mouse knows how to effortlessly entertain in a way that allows for ultimate escapism at its most enjoyable.

“Beauty and the Beast” runs through August 7, 2022 at Port Tobacco Players, 508 Charles Street, La Plata, MD 20646. For more information and to purchase tickets, please visit their website here. PTP is currently requiring all patrons to wear a mask, but no longer requires proof of vaccination.

Topics #Alternative #Beauty #Health Care #Medicine #Popular Diets
Don't Miss it Exipure Reviews – Is It Worth It?
Up Next Disney & ABC present ‘Beauty and the Beast: A 30th